Not Quite a Tempest in a "Teapot"

As I was preparing for the upcoming exhibition “The Show at the Top of the Stairs at the TAG Gallery in Los Angeles (August 11-25, 2018), a friend of mine made me laugh when he responded to my work, Nigori Tempest 2. He said it reminded him of watching a front-loading washing machine. There is a resemblance to the shapes clothes make as they tumble in soapy water just as substances of differing viscosity do when they move in liquids-think oil and water. Like my friend, I sometimes stop and gaze at front loaders with a good window view. Car washes have their fascination, too. The world can be an exciting place when looked at just so.

For the record, that isn’t how quite these images originated. 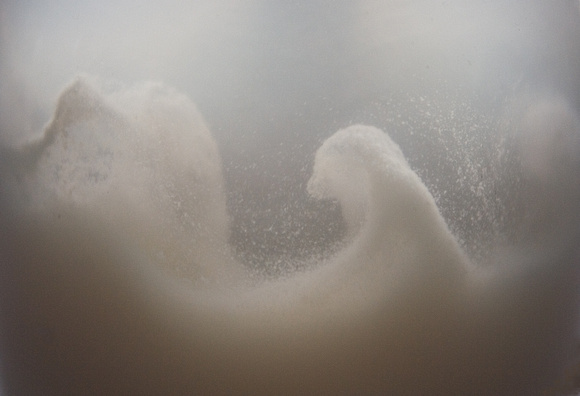 Clearly though, there is something going on in these images. And here’s the skinny: the title is taken from the contents of the bottle I photographed. Nigori is a kind of sake, Japanese rice wine. Nigori is unfiltered sake. Consequently, it contains sediment from the rice it was fermented from. The nigori is meant to be stirred up before pouring and drinking making the liquid cloudy.

I happened to have been given a small bottle and found the clear round shoulders of the bottle and the white swirling particles enchanting… it set my imagination going. Because it is a contained environment, like a snow globe or a terrarium, it reminded me of how fragile our planet looks from outer space with its thin layer of atmosphere. The way the sediment moved reminded me of how sand and snow move at the direction of wind and water. The muted colors of the nigori with its slurry transforming the interior of the bottle’s landscape held its own fascination. When still, the landscape looked much like a dune desert or an ice field piled with drifts and the mystery of their movement. And it also says something about perturbation in a closed system -- when sufficiently swirled, it looks like a dust storm. This often meant having to wait for hours between taking pictures while waiting for the sediment to settle once disturbed. And each time things did settle down, there was a subtly different “landscape.”

This would be the time to invoke William Blake’s poem that starts, “To see a World in a Grain of Sand.” It’s a sweet poem, and I’m going to leave that up to you. Here are a couple of interesting links to take you there (it’s not long). Another inspiration was the Stanislaw Lem novel, Solaris, with Lem's descriptions of an alien landscape. And the film version is pretty faithful to the intent of the book.